Recently, I have been getting interested in old computers, especially one with low amounts of computing power. The Apollo Guidance Computer has been the one I’ve been reading the most about. It is pretty amazing the way it is designed and how it was able to guide a rocket all the way to the moon and back. It was one of the first computers to heavily use integrated circuits. Some of the hardware used was really unique and embodies a great methods in computer design.

The team in charge of creating the computer at MIT had some pretty intense constraints when it came to the size, computing power, and functionality of the system they were designing for the guidance system. It was the first computer to make use of integrated circuits. The computer had to be small and light to fit in the spacecraft and it also had to control almost all of the operations for guiding the ship.  It was also in charge of making the rendezvous between the command and lunar modules. Each module was fitted with a guidance computer to allow them to dock after the lander left the moon.

Thew interface for the AGC was very similar to that of a calculator. Commands were entered in as two digit numbers that were either a verb or noun. The screen would display certain flight information. I found it funny that the data was displayed as United States customary units, but was stored in memory in metric form. I bet that had specialized hardware just for converting the units, but I can’t find any info about that yet.

For timing the AGC used a 2.048 MHz crystal to keep the clock going. It was divided into sections for internal operations of the computer and signal frequencies for syncing the clocks of the lunar and command modules. Other divisions were used to keep track of a real time clock and certain counters used by the units operating system.

The way they created memory for the AGC is what really blew me away. Large amounts of memory were stored in stored in a form called core rope memory. It was memory created by weaving copper wires around magnetic rings. It gained the name little old lady memory because it was produced by female factory workers. At the time is was a pretty dense form of storage despite being made of hand woven copper wiring. Compared to RAM used in the AGC it was 16 times as dense. It was used for a pretty long time in computers, especially ones that controlled telephone switching. The first space shuttle even used rope memory because of the resistance to radiation and electromagnetic interference it exhibits. Lots of military vehicles used it as a result. 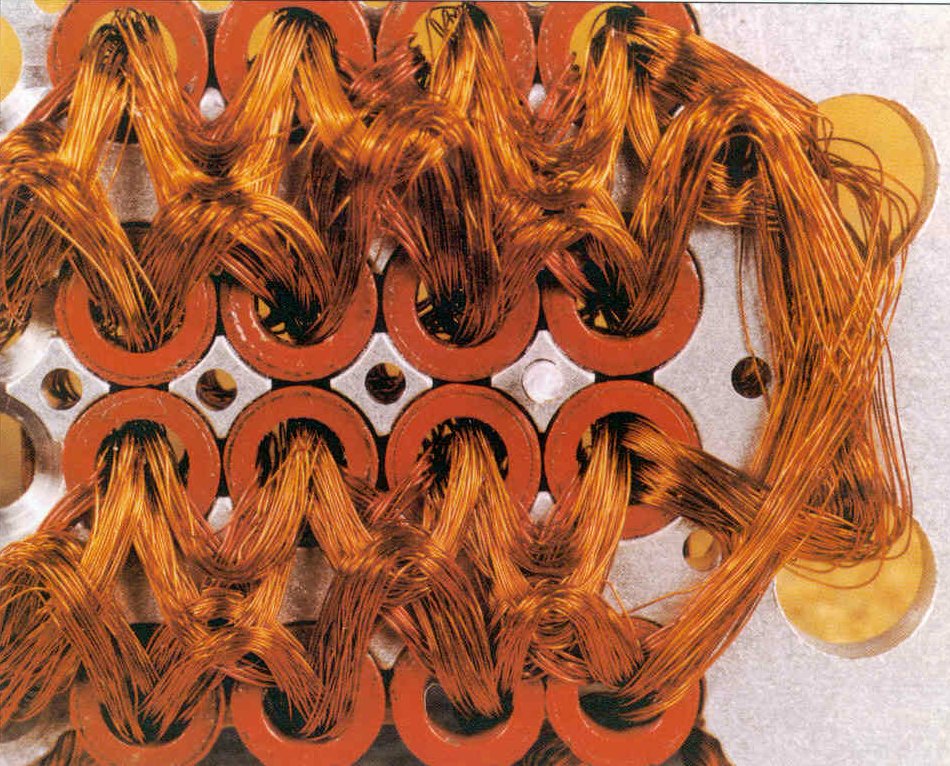 That’s about all I have for now about the AGC. I think a bit later I’ll write some more about the software used on the AGC and some of the neat tricks that MIT came up with to get the most out of the hardware.